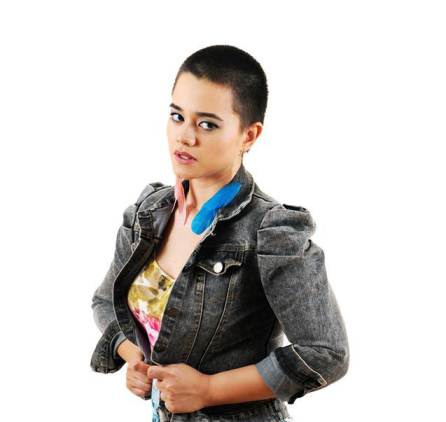 *This is the third of a three-part feature about Marrying Me. Read the first part here and the second part here.

We have read how Christopher Ling describes this musical comedy of his and so have we heard from EllaRose Chary. How about the leading lady, the star, the heroin of Marrying Me? We wanted to know what is it like for her to work with such an international group, and how it is like playing someone else shares something in common with her.  So, for the third and final installment of the Marrying Me special, PenTAS talked to Stephanie Van Driesen.

Bitten by the acting bug when she was a just teenager, Stephanie has embarked on a long and arduous journey, all in the name of art. This singer/actor/dancer not only has a degree in musical theatre from one of Asia’s leading art schools, Lasalle College of the Arts in Singapore  but she also nabbed the college’s coveted President’s Award [Source: R.AGE]. Upon graduation, she returned home to Malaysia and has since made quite the name for herself in the local performing arts scene, appearing in hit shows such as The Secret Life of Nora and Cabaret. In a week’s time, you will get to see Stephanie on stage. Before that, let’s hear what she has to say about the world the folk of Marrying Me have created.

How do you see Marrying Me?
A musical about one woman’s journey towards self-acceptance. All throughout the musical other “voices” – that of her mother, tradition in general, her own doubt and fear – keep her from owning up to how she really feels about who she is and what she wants, so she fights against the labels people put on her, as they try to get her to fit into what they want her to be, to make them happy. But in the end she realizes the only one who can truly make her happy is herself, and she begins to own that.

What drew you to audition for this musical?
I didn’t actually audition for the role. It was more of an invitation. I had worked with Christopher Ling before on Songs for a New World at the beginning of this year, and with Onn San on The Secret Life of Nora in 2011 as well as on his début album Epomania on which I sang. I really enjoy working with them and I admire their work so any opportunity I have to work with them I would be keen on. They both approached me with this idea of a new musical and really wanted me to be part of it. So I said yes even before I had heard the music or read the script (which was still being written at the time).

Could you tell us a bit about Stephanie?
She starts of as quite an angry, frustrated character, she has a lot of fight in her, and she doesn’t give in. Throughout the musical it is revealed why she is as she is. She talks to herself a lot, and tries to get the audience on her side. She is someone who had changed herself earlier in order to keep moving on from her past, but now she has become stuck in the conquest to prove others wrong. We see her unravel and we see her weaknesses, and hopefully we find ourselves relating to some of what she goes through.

How did you approach the character you play?
I relate to her in some ways and in many ways I don’t. So it was a combined effort of fleshing out the character’s landscape in collaboration with the playwright’s (Mark Beau) view, Christopher Ling’s vision, and in conversations with the other actors. For me, it’s an organic process too where I like to keep adding layers to her in the scenes, finding out what she really is looking for in every moment, and bringing it all together so it makes sense. It’s still an evolving process. I take many cues from the music, which is very emotional and evocative, to help build her inner world, because very often in musicals it is in the music, i.e. songs that you discover what the character truly feels and wants.

Were there any challenges in personifying Stephanie?
Yes. Aside from the technical aspects of getting everything down, i.e. music, script in such a short time where we had scenes and musical numbers still being written and rewritten even as rehearsals began, I had difficulty accepting her. What this means is that I as the actor had certain judgements about her and it became difficult to really step into her shoes because there are many things she does, says, or reacts to in a manner I would never in my own life, and wouldn’t want to. So the fact that I was bringing to life someone I didn’t “endorse” was hard, but I had to discover that she really is a part of me somewhere inside me, perhaps a persona that I had locked away somewhere, or shut off the way the other characters want to hush her voice. But slowly I began to accept that she had a unique voice, and I began to use her voice as an opportunity to say things I personally would never voice. I began to enjoy the release and license it provided. Actor’s privilege! What was and is still challenging is keeping the through-line of her story fresh and alive in my mind as we progress through the play, as there is a lot going on all the time from start to finish, and it has to make sense very clearly every step of the way of where she is on her journey.

Both you and the character you play share the same name. Is there anything else that you two share?
Yes, and more than I’d like to admit at times. We both have this fighting need to be free. To be free of convention and do things our own way. In life, we often don’t allow ourselves to really challenge all that we believe in when it doesn’t work anymore, and fewer of us have the courage to really take the action required to move things along in that direction. The character and I are both free spirits caught somewhere between flying free and giving in to doubt and fear. We want to do things our way, even if others agree. And we both still need to accept ourselves more.

How was it like working with the rest of the cast of Marrying Me?
Fun and crazy! I’m so glad I get along with everyone in the production. *breathes sigh of relief* It just makes the whole process more enjoyable. We crack each other up so sometimes it’s hard to keep a straight face even in more serious scenes! Of course, playing off the other actors is always the best part. We’re still finding our nuances and I’m sure we’ll discover more even on the stage once we begin the performances as the audience is also another important participant in the show. The energy of the show can change depending on the audience, too.

How was it like working with Chris?
He is a very visual director, and so works a lot in terms of how he wants the audience to view the scenes, the characters, and what he would like the audience to come away with thinking. There is always a point he wants to emphasize in line with the story. So I think he works towards that in every scene. He also allows the actors the freedom to realize their characters and only steps in when something we choose to put into the characters isn’t working or doesn’t feel right. So you have to be an independent actor and do your homework! I really enjoy his creative use of space. On top of that he is like the gleeful spectator, and really enjoys himself in rehearsal, unless we are all over the place, which is when he doesn’t think it’s funny at all!

What kind of experience can the audience expect when they come to see Marrying Me?
I think it’s really a slice of true honest Malaysian life. Those at or above 30 years in the audience may totally relate to the pressures of getting married that families place on them, and everyone will recognize someone in the musical as someone they know in real life. The musical is also very exaggerated especially in certain musical numbers where something major is being highlighted. Hopefully the honesty still comes through even with all the fanfare. In that there is quite an absurd element, so the audience is in for a treat. It’s a musical that has everything – comedy, pathos, some tragedy, danger, etc. Also, it’s not a musical where audiences are just passive onlookers. We really want the audience to feel they are part of the goings on, and that they have a voice too that is heard and felt in the story.

Finally, what would you like to say to those coming to see Marrying Me?
Just have fun! Come with an open mind, and have a few drinks before so we’ll all look much more attractive onstage!! Haha, maybe not. But seriously, just come and enjoy a truly Malaysian musical with quite a lot of something extra. If you are a hardened nut and the story doesn’t move you, then the songs will! I think the audience will come away humming some of the tunes. I’m glad to be working on a very groundbreaking musical and I believe this musical can go far, even onto international shores. So, here’s hoping for the best, and the audience support is very much needed in order for this to take off.

So, here you have it people. Now that you have read all about Marrying Me, it’s time for you to get your tickets and join the cast and crew at penangpac from 5 – 8 December 2013!

One thought on “PenTAS Exclusive: A Chat with Stephanie Van Driesen of Marrying Me”